You have no items in your cart

'Tis the Season of the Autumnal Equinox

The vernal versus autumnal equinox marks a day of the year when day and night are almost equal in length, based on terra's orbital position relative to the sun be it in March or September, respectively. 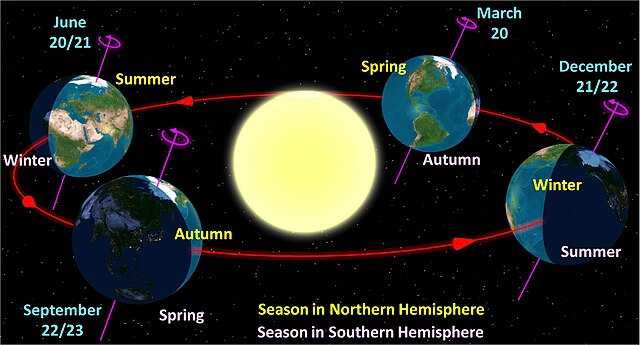 In ancient days of millenia past, those who lived much simpler lives, oft referred to as Pagans, were people who intuitively felt connected with the natural world and its cycles. They realized that their lives are dependant upon the Seasons and other forces of Nature and thus learned to work as a group especially when it came time to prepare for Winter. They saw the natural wonders of rain, lightening, rivers, mountains, forests, berries, herbs, animals ... all as part of a whole that works together in proper balance. Summer is balanced by Winter with a transitionary period in between, allowing for preparation. It was up to them to learn to make use of what's available on an as needed basis, take care of one another and show gratitude to the gods.

The world with its wonders and dangers only made sense if there was some kind of intelligent design behind it all, hence there grew the belief that various beings worked together to accomplish this harmony and provide for all life. It made sense to venerate these ethereal beings and show appreciation and joy through crop and sometimes animal sacrifices while enjoying bonfires with food, music & dance festivities.

It is our perspective that religions, which formed later, are merely schools of thought, meant to teach a grounding of the soul, inner peace and temperance or wisdom through love out of which one may respond appropriately with the phenomenal world, life as a whole. Should one path meet another, there's a chance to exchange experiences and share wisdom gained, and both lives are enriched as are those whose lives are touched by each. There is never an inkling of conflict because the exchange is not ideological (head) but experiential (soul)! So as the year gracefully celebrates the balances between day & night before it favors night, perhaps we as humans might also consider the balances of our lives … energies within, energies without … what would it take to create well-being within oneself? We have ultimate authority here. How about creating an abode within which one may feel at ease, relax, de-stress, have one's energies replenished by the sight and sound and scent of one's environ ~ a habitat of color and texture and freshness, both alive & warmly illuminated just right to appreciate the elements of one's inner expression all around.